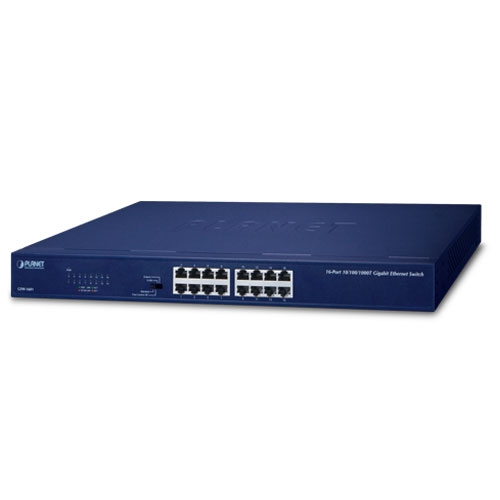 PLANET GSW-1601 Gigabit Ethernet Switch provides 16 RJ45 10/100/1000Mbps ports for high-speed network connectivity. It can automatically identify and determine the correct transmission speed and half/full duplex mode of the attached devices with its 16 Gigabit ports that support 9K jumbo frame feature. Therefore, the GSW-1601 can handle extremely large amounts of data transmission in a secure topology linking to a backbone or high-power servers.

The new hardware version of the GSW-1601 offers “Standard”, “Flow Control Off”, “VLAN” and “Extend” modes.

The GSW-1601 operates as a normal Gigabit Ethernet Switch in the "Standard" operation mode. The "VLAN" operation mode features port-based VLAN function that can help to prevent the connected clients’ multicast or broadcast storm from influencing each other.

In the "Extend" operation mode, the GSW-1601 operates on a per-port basis at 10Mbps duplex operation but can transmit data over a distance of up to 200 meters overcoming the 100m limit on Ethernet UTP cable. With this brand-new feature, the GSW-1601 provides an additional solution for distance extension, thus saving the cost of Ethernet cable installation. Its VLAN isolation function isolates each port so as to prevent broadcast storm and defend DHCP spoofing in the “Extend” operation mode.

The GSW-1601 provides a high-performance switch architecture that is capable of providing the non-blocking switch fabric and wire-speed throughput as high as 32Gbps, which greatly simplifies the tasks of upgrading the LAN for catering to increasing bandwidth demands.  Besides, the Flow Control function of the GSW-1601 enables routers and servers to directly connect to the Switch for fast and reliable data transfer.

All the RJ45 copper interfaces of the GSW-1601 support 10/100/1000Mbps auto-negotiation for optimal speed detection through RJ45 Category 6, 5 or 5e cables. It also supports standard for auto-MDI/MDI-X that can detect the type of connection to any Ethernet device without requiring special straight or crossover cables.

The GSW-1601 supports Store-and-Forward forwarding scheme to ensure low latency and high data integrity, which eliminates unnecessary traffic and relieves congestion on critical network paths. With an intelligent address recognition algorithm, the GSW-1601 recognizes up to 8K different MAC addresses. The high data throughput and 32Gbps internal switching fabric make it ideal for most Gigabit environments, especially when network is upgraded to a Gigabit environment.

With its good ventilation design, the GSW-1601 is able to operate all along without a fan, thus reducing substantial power consumption and creating a noiseless environment. The GSW-1601 is definitely the best choice for any working environment without affecting its performance.

With up to 32 Gigabits per second of non-blocking switch fabric, the GSW-1601 can easily provide high bandwidth for both today’s and future requirements. 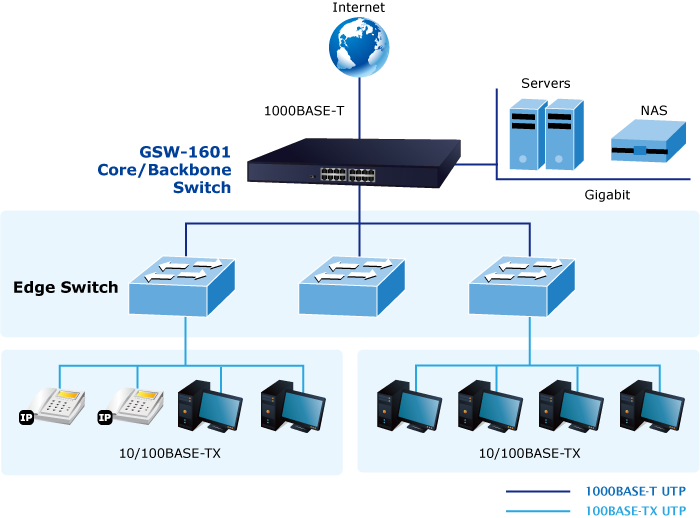 Providing 16 Gigabit Ethernet ports, the GSW-1601 is ideal to be used as a server farm switch connecting to your servers and powerful desktops. 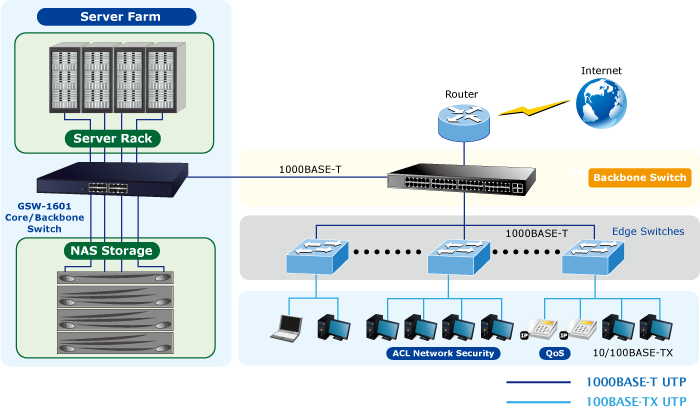